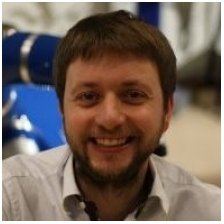 Graduated in Dresden (Germany) in 2007 with a Master’s in automation and control engineering. Went to Siemens in India developing medical image processing algorithms. From 2008 till 2016 developing at the Telerobotic and Haptics Laboratory at the European Space Agency in Noordwijk (The Netherlands). He contributed there to the first handshake with force reflection between an astronaut in the international space station and earth. In 2017 Stefan founded together with his colleague Joao Rebelo the company S2E bringing the knowledge that they learned in space to earth.